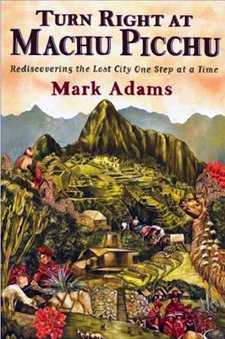 Mark Adams is writer and editor, working with some of America's best-known magazines. He has contributed to G.Q., The New York Times Magazine, Fortune and is a contributing editor for National Geographic Adventure. His first book, Mr. America: How Muscular Millionaire Bernarr Macfadden Transformed the Nation Through Sex, Salad, and the Ultimate Starvation Diet, received rave reviews upon it's release in 2009. Turn Right at Machu Picchu: Rediscovering the Lost City One Step at a Time is Mr. Adam's latest addition.

The ruins of Machu Picchu, located in the Peruvian Andes, have become one of South America's most frequented tourist attractions. In recent years, access to Machu Picchu has come in several forms, from hiking the Inca Trail to the bus rides up the Hiram Bingham Highway to taking the local train. But, in 1911, the only route was hiking the trail, which is exactly what explorer, Hiram Bingham III did with the aid of local guides. He is credited with 'discovering' the ruins and made subsequent visits in 1912 and 1915. He also published his book Lost City of the Incas in 1948. Amidst the accolades of Bingham's find, the controversy began. Was he truly the first to discover this forgotten piece of Incan history or had others come before him? There are many claims to the latter. Mark Adams set out to follow in Bingham's footsteps and possibly uncover the truth.

Mark Adams' 2011 book Turn Right at Machu Picchu: Rediscovering the Lost City One Step at a Time gives the "armchair traveler" a chance to make the trip. Of course, one can read Bingam's Inca Land or Lost City of the Incans but Adams' book has made the trek pure joy. From chewing cocoa leaves (for altitude sickness) to addressing why and who built Machu Picchu - is it pre-Incan, built a thousand years before Pizzaro's arrival or as a "Camp David" for the most notable Ican leader Pachacutec. Is Indiana Jones really based on Hiram Bingham? All this and more is revealed as Mark Adams leads you on a true life adventure.

I loved this book! Imagine hiring a guide and trekking this amazing area. My husband and I visited Machu Picchu two years ago and reading Mark Adams' Turn Right at Machu Picchu brought back fond memories. We didn't hike the Incan Trail like Mark did, we took the local train. Of course one could also travel via the Orient Express!

This book was received courtesy of Dutton, Penguin Publishing USA. The review was written by Deb Martens.

Find this book on Amazon: Turn Right at Machu Picchu: Rediscovering the Lost City One Step at a Time