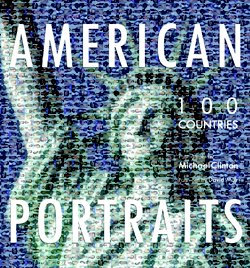 Editor's Note: The Book Club blog style design (means coding), only allows for an image of a book's cover art to be displayed in any given review. I have linked two of the book's featured participants to my gallery if you wish to view their images. I definitely recommend checking them out.

Michael Clinton is President and Marketing/Publishing Director for Hearst Magazines. He oversees titles such as Cosmopolitan, Popular Mechanics, O: The Oprah Magazine, Harper's Bazaar and several others. Mr. Clinton is also an avid photographer and traveler. He has seamlessly woven those two passions together, creating Wanderlust: 100 Countries, Global Snaps: 500 Photographs from 7 Continents and Global Faces: 500 Photographs from 7 Continents. American Portraits: 100 Countries is his latest addition to his on-going repertoire of published books.

America. And by that, I mean the U.S., the U.S.A., the United States of America. No matter how you write it or verbally express it - America means freedom, opportunity, dreams coming true and much more for many people from many countries. Although the term "melting pot" did not come into use until 1908 (taken from the title of a play of the same name by Israel Zangwill), America has held up to the term. It is a country of indigenous and immigrant people, all coming together as one nation. It is not a perfect society by any means, nor will I try to state it is, but it is the largest society with the most diverse components and history.

It is due to this complexity, and own heritage, that Michael Clinton has taken his latest literary journey. In his own words, "In my travels to nearly 120 countries around the world, I've never met anyone who has not been intrigued or hasn't dreamed about coming to America... to visit, to work or to start over again." With that in mind, Mr. Clinton set out to "find Americans whose bloodlines all added up to one hundred countries of origin". He accomplished that task with 93 individuals who, like you and me, are not celebrities, politicians or other high-profile figures. They are the everyday work-a-world people who found prosperity in America.

American Portraits: 100 Countries is actually a 'coffee table' type of book. It's hard-covered, large in size and not something you would take traveling with you. But, it is a very interesting read. The portrait photographs which accompany each entry are worth the "price of admission" alone. As an example - take Teszar, his parents immigrated to Canada, then to America, from Hungary.

American Broadcasting Company's (ABC) News Correspondent/Anchor, David Muir, wrote the forward for this publication. I'm a bit biased because I watch ABC news nightly and like Mr. Muir's reporting very much. But, his forward did honestly capture the essence of American Portraits. Having traveled the world, he understood the "pull" that America has on so many other people globally.

I must admit it only took a short period of time to read all of the entries. Again, as mentioned above, it is a coffee-table-style-book. Each description is a paragraph in length. I have found myself going back and re-reading many of them. From Mayanna Prak's family escaping Pol Pot's regime in Phnom Penh, Cambodia during 1975 to Renan Pierre's family fleeing Haiti for Zaire (Democratic Republic of Congo) then to America. The personal stories, though short in length, are genuinely enlightening.

I'm married to an Armenian/Turk/Swede/Norwegian. Though neither of us are into genealogy, the ancestral stories we have heard have been fascinating. I'm an adopted child so only know I am part English. The rest is a toss-up and maybe one of the reasons I keep going back to this book - these participants know their roots and are very proud of their accomplishments in America. I do know it is a book I will keep on my coffee table and revisit on a regular basis as it is inspirational.

This book was received courtesy of American Portraits by Michael Clinton, copyright © 2010, published by Glitterati Incorporated.

Previous Next Table of contents