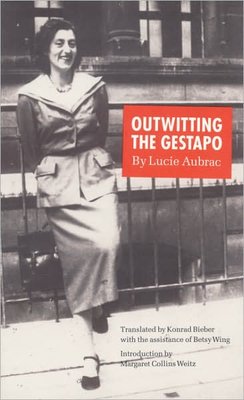 This year witnessed the 70th anniversary of the Fall of France, the event which signalled German invasion and an end to the so-called Phoney War. However, this year also witnessed the same anniversary of Charles de Gaulle's 'Appeal of June 18', where he ignited "La Flamme de la Résistance". Calling for a continuation of the war in France, against the armistice being prepared by the French government, this appeal by de Gaulle signalled a major step in the history of the resistance in France.

First published in 1984, Lucie Aubrac’s memoires Outwitting the Gestapo detail her involvement in the resistance in and around Lyon, from May 1943 to February 1944. The wife of resistance leader Raymond Aubrac, Lucie was heavily involved in the activities of the resistance, including the daring rescue of her own husband from the clutches of the Gestapo. These activities also led to numerous meetings, under false pretences, with the "Butcher of Lyon" himself, Klaus Barbie.

Aside from the humble heroism and determination illustrated by Lucie in these events, what makes this account a particularly engrossing read is the personable and sometimes poetic style in which it is written. Despite all the desperate struggles which the family and their friends find themselves in, there is a deep romanticism from the author, displaying an honest passion towards France, everyday people, and the notions of liberty and free will. The perspective of a woman in the resistance is also rewarding, as Lucie demonstrates both her feminist and maternal aspects, the latter highlighted by the fact that she is pregnant for the nine months that the book covers.

This account, although the view of just one resistor over a set period of time, embodies in it the heart of the resistance. It is a call to remember all those who played their part, whether it is Raymond Aubrac as a leader, a shop owner, or the families that help conceal resistors when they are in hiding. As the memories of the 40s begin to fade, perhaps now it is more important than ever to pick up a book such as this and remind ourselves of why we can travel through Europe in relative peace, and of the contribution to this made by the participants and supporters of the French Resistance.

Find this book on Amazon: Outwitting the Gestapo

Previous Next Table of contents